I wasn’t crazy about the original Life & Limb, which of course came with plenty of hype, but this version seems to have slipped in with a little less fanfare. I am assuming there are some differences (apart from the presentation which has moved from the 24 oz ‘stubby’ to the SN, shouldered 750) since this beer is now called ‘2’, but the ABV seems to be the same, and looking at my notes from November of 2009 (below), things look remarkably similar.

Flesh colored cap on the cage, that reminds of the color that one used to see on Guinness labels and paraphernalia back in the 1970’s. Cork has ‘Life and Limb’ written in three places. 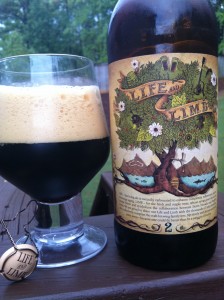 Nose is a sweet, malty, brown-bread bomb with some yeasty notes and some alcohol but not in an overpowering way.

Some salty bitterness strikes me at the first then comes more of the brown bread that was produced in the nose. Hints of light charcoal and aniseed cut across but it’s never bothersome or large. Milk chocolate in the back end and some more aniseed. Medium body that is really quite smooth. The alcohol and the licorice both build, but neither get to a point where they become a one-dimensional, dominating feature. Just like the notes suggest from the original, this is a surprisingly non-aggressive beer, and considering everything else, a pretty easy drinking beer! 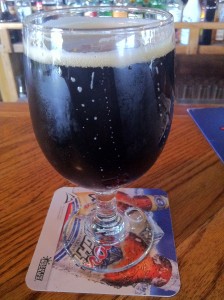 More licorice in the back end but it’s not really bitter. A sweetish elements to it with a little aniseed as well. Alcohol is extremely well hidden.

Pour is a dark, chestnut body with some frothy lace sitting on the surface. Little lace, but as expected for the ABV.

Surprisingly smooth drinking given the alcoholic content. The beer is very sweet (obviously as a function of the syrup), but also maintains a decent balance of flavors without losing the plot. Alcohol is very well hidden until the back end when it kicks in slightly. Hop profile is lowish.

Definitely a light, woody note and some well worn leather in there too. The beer is actually more rounded than I expected and comes together in quite a gentle way considering the complicated array of ingredients. A little medicinal and organic, and a pronounced leafy or earthy tone in there as well. Hay?

I was surprised at how accessible this was as I was expecting an assault on the senses that would be too aggressive. Having said that I don’t know that the price, ABV or type of beer that this is will lend itself to anything other than the very occasional tipple.

Better than expected, but still just too much all in one glass for me.