An interesting one since this appears to be a beer that is blended in Belgium (at De Troch) for Vanberg & Dewulf who seem to be an importer based in Coopertown with ownership in Chicago. The addition of Kombucha interests me greatly as well, as I always feel that tea (and tea-like) beverages have a potentially interesting marriage with beer.

Decent ‘fizz’ on removing the cap which is certainly encouraging. The beer pours with an pale yellow color and a LOT of fizzy, light carbonation. The head drops off rapidly to leave a thin film of carbonation on the surface. The beer is ‘noisy’ in the glass as the high carbonation continues for several minutes after settling. Almost like a sparkling wine in that regard. 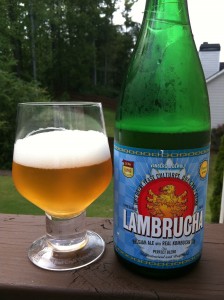 The nose gives that highly carbonated, dissolved CO2 effect along with a gentle kiss and touch of lemon.

The tastes are a pretty interesting balance. It starts with the threat of a seriously sour beer, but almost immediately gives way to some gentle lemon and citrus notes. I’m VERY interested in tea being used as an addition to beer, but in pretty much all of the analysis by my taste buds there really is not much (detectable) tea presence here. The beer is certainly refreshing and light, BUT it really does tread a fine line when in comes to being a bit watery. 3.5% beer does NOT need to lack depth, but when you are dealing with this style there can be a tendency for things to drop off a little too much.

There’s a hint of light lemon in the beer but it’s never strong. It ALMOST, and I mean ALMOST, delivers a touch of ginger in the back end – I wonder if that is the tea coming through.

A very light prickle in the mouth that is entirely appropriate for the style. For me, the beer doesn’t finish very dry at all. This is especially true when you consider others within the style, and as such, with the lack of real sour character (replaced with light tartness), the low ABV and the citrusy notes, this is a very approachable beer for the uninitiated in the style.

Absolutely delighted to be able to drink a beer of this ABV, so that in itself is a massive positive for me from the start. Interestingly, the website describes this in terms of being a session beer (making me happy) although obviously not really a traditional one.