Classic Stone presentation. Screen printed bottle with usual Stone nonsense on the back. August 2011 printed along with ENJOY FRESH directly underneath that. I generally dislike ‘Black’ IPA’s both in name and in taste. Utter nonsense on both counts.

Thick head, on top of what looks like a viscous, jet black body, but the mouth doesn’t reveal the density that the look initially suggests. Head retention and lace are both very good considering the ABV. The appearance of this beer is, by light years, its best attribute. I strongly suggest admiring it in the glass and not drinking it! 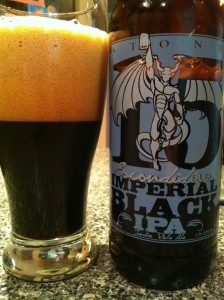 Nose gives a West Coast, piney blast and nothing else. One dimensional as usual, but particularly pine based given the Stone treatment.

Licorice bitterness is extreme and reminds me a little of concentrated hop pellets. Same can be said of the taste which has a ‘bitterness for bitterness’ feel about it. Silly, juvenile posturing that reminds me of BrewDog; almost seems like Stone is regressing.

Lingering bitterness has a somewhat smoky edge. Wave after wave of unrelenting bitterness do two things. They fatigue the palate dreadfully and secondly they make a mockery of any malt base that might be there to hold the beer together. Liquid pine drains my enthusiasm dreadfully, and the alcohol effect seems VERY apparent and terribly, tedious.

The attraction of this beer as a drink of leisure is lost on me, it’s just much too much like hard work. It feels like it’s a task/job to drink it – just about the very last thing that I want in a beer.

In some ways this is really the antitheses of beer. You can’t drink a lot of it, it’s not moreish, it doesn’t encourage consumption, it has a silly ABV and it screams, ‘look at me I’m a noisy teenager’ in all aspects. Irritating, and not to be taken seriously, Stone would do better producing their classic clone Belgians than this nonsense.

Big, bold, brash extreme beer for the sake of it and not for the taste of it. In a phrase, ‘predictably disappointing’.