The label shows a giant with a severed arm and lot of theatrical blood. OK, whatever, but the name of the beer that is spelled out in said blood is just about unreadable which is annoying to me. The beer is apparently brewed and bottle by The Musketeers in Belgium and imported by ‘WIN-IT-TOO Inc.’ which is apparently associated with www.globalbeer.com. I suppose this is being associated with Brasserie Beck in Washington D.C., and Robert Wiedmaier. Confusing. 750 mL (plastic) corked & caged bottle.

The beer pours with a little more carbonation than I was hoping for and it leads to a very fluffy head, plenty of lace and some good retention. To be honest the color lacks the golden intensity of beer of the style and frankly I might call it a bit ‘washed out’. As I observe the beer, little do I know that this is a precursor of things to come. 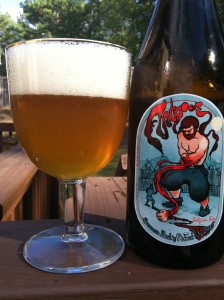 Nose & tastes do not give the intensity that one might expect for the style. There is a lack of white pepper, a lack of alcohol presence and general absence of a ‘edge’ that one normally looks for in this style; even in a ‘single’ or ‘simple’, Belgian Pale. The beer offers some clean edges, but it lacks depth and that’s the real issue here. I wanted something that DIDN’T taste like a Wit, but I got a beer that felt lighter than it should. Nothing offensive, we get a mild dose of yeasty bread, a touch of bitterness, a dab of light grain and some generally OK mouthfeel, but in the end the beer was largely forgettable and something that I would not considering buying again. All in all, a little weak, frankly.

Other: 6.8%, Belgian Pale Ale. The beer was purchased at Total Wine in Kennesaw, GA where it occupied a large, dedicated display in a prominent position. It’s also a beer that I had never seen before so I am wondering is this was a ‘job lot’ for Total Wine. It tasted a little like that. $9.99, and not very good value.