Another beer in the charitable, reunion series. 22 oz bottle. A ‘Dark Imperial Ale’ whatever THAT is! This is the Shmaltz version.

This should be interesting since Shmaltz is one of my favorite brewers with their malt based offerings, and Terrapin’s star has been fading quite badly in my eyes over the last couple of years – too many beers, in too short a time has bred some mediocrity.

Nice reddish, garnet color on the pour with an initially very high, pitted, rocky head. The head has very poor retention and lace over time considering its initial flourish. 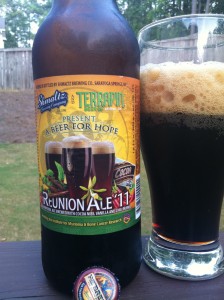 Quite a strong chocolate nose. Mixed in with the sweet malts there is a very discernible milky note. Sometimes chocolate notes in the nose can be a bit dry and powdery like a baker’s chocolate, but this seems a little richer than usual with some nice milky overtones.

The brown ale continues to bring the chocolate all the way through the beer, but in the middle and back end you really begin to get some heat. It’s not just heat in passing either, it really starts to give a chilli-beer effect that I’m not incredibly keen on, but the heat is preferable to some brown ales in the American style that can get really hoppy and bitter. The creamy chocolate keeps coming back and it tempers the heat to an extent so there is a balance of sorts. Alcohol is present but not overpowering.

This is a pretty unusual beer in as much as it marries some distinctly, diverse flavors and elements with the caramel based brown ale dovetailing with chocolate and some chilli based heat; frankly, it drinks a little better than that combination sounds, but at the same time it’s not a combination that I think works incredibly well. Typical of so many American brewers, this beer pushes a bunch of totally unnecessary envelopes. What’s wrong with a damn fine, solid brown ale? It’s gotten to the point where it’s difficult to find simple, well made examples of some styles that have sensible ABV’s and traditional ingredients. This beer is just another example of breweries trying too hard IMO.

Other: 7.3%, Gold foiled in the Terrapin version, no foil on the Shmaltz version brewed and bottled at different locations with the same recipe.