Poured from the Hop City growler it is a beautiful, brown garnet look with a creamy looking, off-white head. It really looks substantial, has excellent clarity and is impressive in terms of its presence. Bold looking beer that says ‘come and have a go if you think you’re hard enough’. 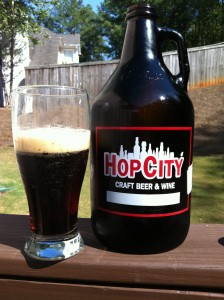 The nose produces notes that are sweet, caramel based with some brown sugar and a touch of alcohol. There really is very little smoke in the nose.

Tastes are rich. This is a VERY good thing for a beer of this type, and the caramel-like malts remind me of a rich, brown ale as much as anything else. Light smoke cuts in now and then, but someone suggested that this beer is essentially a smoked brew. Having partaken in a growler I can confidently say that I think that assessment is wrong. Sure there are some smoky, peaty elements as the style would suggest and indeed demands, but this is not a beer that produces high levels of Rauch character. A few smatterings of alcohol are there, but the beer seems to stay well within the classic parameters of a robust, highly malt based brown and that pleases me.

A beer that surprises me a little. Monday Night has had a rough start in terms of reputation around Atlanta, but the first two beers have suggested better than I have heard. The addition of Thomas Creek is confusing as well, since that brewery really hasn’t impressed us consistently in the past. We’ll see, but I am encouraged at this stage. This is a solid offering, good work.

The mouthfeel pulls off and difficult combination of light drinkability with a feeling a decent, rich, satisfaction. Not an easy feat.