22 oz bottle, somewhere between $7.99 and $8.99 in most Atlanta retailers. The gold foil and the vivid blue of the label make this an attractive package externally. The pour (a rich, almost black color with a super head and some nice lace) match the intensity and the pleasurable nature of the look, and have me salivating at the prospect of tasting it. Having drunk this last weekend, I actually went back and bought another bottle – partly because I enjoyed it so much the first time I drank it, and partly because I couldn’t believe how much I enjoyed it the first time I drank it – I wanted to check! 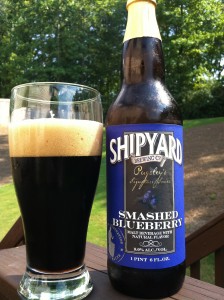 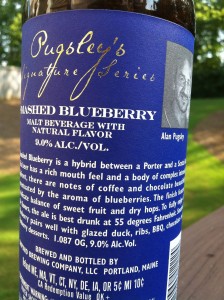 Part of brewer Pugsley’s, Signature Series, I was hoping this was going to be better than some of the others in that collection – it is! After the pleasing package and the promising appearance, the nose opens with some really strong, ripe blueberry. It fades slightly to give a rich coffee note, but the fruit lingers to give some suggestions of a fruit infused coffee.

There is no doubt that coffee elements do come through in the beer, which of course given its porter/stout roots is a good thing, but the two tastes that really dominate are the ripened blueberries and some pretty potent alcohol. Frankly that in itself does not sound or seem especially attractive, however they come together to produce (for me) quite an irresistible combination – I really like the rich, ripe tastes combined with the alcohol. In terms of the taste, it almost seems like an infused spirit or flavored vodka., but of course it comes with the added bonus of having a fairly significant body from the stout/porter like origins.

The fruit continues to give a pleasing acidity to the beer, but the ending also brings a finish that is a bit drier than expected. The aftertaste reinstates the blueberry notes and even some more alcohol. It’s good.