SKA is perhaps the American brewery I would most like to see available in Georgia. Over the years I’ve enjoyed many of their products, and True Blonde Dubbel is a beer that I have tasted on several prior occasions to this, so it’s about time for a formal review. This, latest 22 oz bottle, came from the Chicago road-trip.

The bomber with the yellow wax is something I really enjoy visual taking in. The blue label with the SKA black and white checks works very well. The beer pours a light golden color, which is a little lighter than the photograph below would suggest. I always get slightly annoyed with the name of this beer (since it’s clearly not a Dubbel), and it has a ABV well above a Belgian Single (simple) which is also suggested by the name, but as soon as I start drinking it I get over that annoyance! 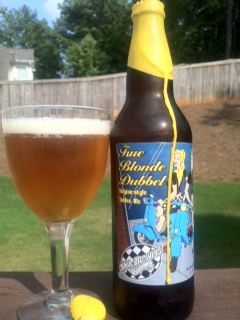 The nose is a definitely strong point for this beer. A real yeasty, beautiful Belgian candy presence that fills the nostrils with some really strong anticipation. The tastes have a lot of the yeasty element as well, as well as quite a dry finish. There is a little hop presence in the back end too, and it finishes with a dry marzipan (almond) factor. There is a lager type presence about the beer (in terms of the the clean edges) but this is also a feature of a great Belgian Strong Pale Ale which is how this beer should be more accurately described.

Some esters add a fruit element, but to me this beer epitomizes an an American version of a Belgian Strong Pale as it tends to accentuate the fruit, Belgian yeast and candy, but also has a bitter finish that adds the American element. We gets some pear elements and a touch of spice from the Belgian yeast too. The beer sits on the back of some pale malts which bring the crisp, clean edge and to me it represents some of the better elements from both countries that it draws inspiration from.

A beer based on several simple elements that works beautifully, and if it were available where I live, I would make it a staple in the rotation.