The third bottled release in the Solitary Confinement series (assuming this is in that series) after Midnight Special and Reprieve, this beer gets back to the really excellent product that Glenn has been producing in Hampton, GA after the mildly disappointing (for me), Reprieve.

The artwork on the label is superb for many reasons, one of which is that it ties in so well with the Jailhouse brand. Jailhouses’ web presence is without question one of the most aesthetically pleasing beer sites that I have seen in years, and this artwork displays the same high quality of presentation showing care and attention to detail. 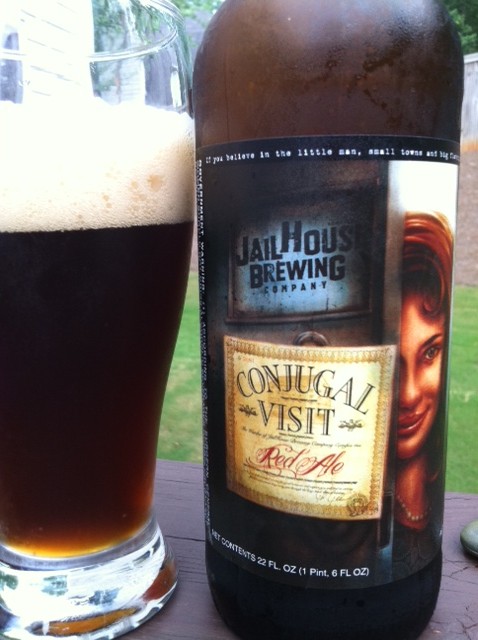 The first thing to greet you is the superb color of this beer. There is an amazingly rich, deep mahogany hue as if the beer has been coated with multiple coats of a dark wood-stain. The bone white head and lace offset this beautifully, and with the exceptional clarity that comes along with it, this truly is a sight to behold. A perfect looking beer in the glass.

The nose does what it is supposed to do, which in the case of these Red Ales is not a huge amount. A pretty simple malt aroma with some nice, toasty, bread notes.

The initial tastes reflect the nose. Some malt bread notes that combine nicely to give a richness that is CRUCIAL to success with this style. If a Red Ale has one area that it must avoid, it’s a lack of depth. American Red Ales can get watery quickly, and this avoids that pitfall immediately. The tastes come in small, but satisfying waves, each a little deeper than the one before, with increasingly biscuity elements that remind me of an English Bitter rather than a Red Ale. There is a LACK of hop assertiveness here which makes the beer more drinkable for me, but perhaps takes it slightly out of style.

The finish is also not quite as dry as a beer of this style usually is. For me, this is almost like a slightly hoppy, ESB. Normally I frown upon such things, but since this beer does NOT claim to BE an ESB, I can live with it.

I suppose there could be some criticism of this beer as it teeters on the edge of the style, but I like what it does. It takes the best elements of the Red Ale, and combines them with an English style, softer edge. The resultant amalgam is very tasty and moreish. ‘Moreish’ is an important word here, because it is the adjective I apply to so many biscuit malt based English bitters. A real sign of a beer that mimics some of the better elements of those beers.

Overall a really interesting, well crafted beer, superb to look at and an enticing mixture of stylistic elements that reminds me of the way Midnight Express was made. I can’t say enough about Jailhouse and Glenn Golden right now, everything he touches oozes class, style and taste.