Characterized on the label as ‘A Belgian Style Golden Ale’, and by other sources as a ‘Belgian IPA’, this beer is now part of the Smuttynose BIG BEER series, but has been a around for a few years previously know as ‘The Gnome’. To be fair, Smuttynose also mentions ‘hoppy Belgian’ on the label too. 22 oz bottle from Green’s on Ponce, this was $5.49.

Pour is definitely golden in color, and a bit darker than I was expecting. Several notches up the Lovibond scale than say a Duvel. Given the 9.90% ABV, the relatively small head is excusable, and there is a decent amount of spotty film on the surface of the beer once the initial foam recedes. 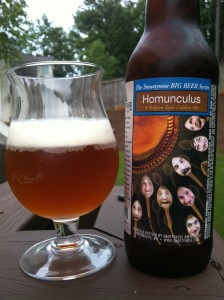 The nose has some nice fruit esters and plenty of alcohol, very much like a Tripel. No significant hop character in the smell to speak of. Alcohol gives a touch of a sinus clearing effect.

The alcohol does not really have the effect on the initial tastes as I was expecting – the nose suggested a much more profound effect. There are some pineapple and grapefruit esters upfront, and those of you old enough (and English enough) to remember Lilt, might recognize it as being a bit like an alcoholic version of that. It fades a little to give some bitterness, but not any significant amount. Finish is dry, then paradoxically sweet, with more alcohol and a little hop character.

I don’t see this beer as a typical Belgian IPA at ALL. Sure there is a bit of bitterness but it’s much sweeter than the typical examples, and the Belgian yeast gives very large fruit ester character. Overall, the beer is quite smooth, hides the alcohol very well and is a slightly bitter, fruity experience, but if you are seeking a quintessential Belgian IPA this is not it. Frankly this is a Tripel, that reminds me a little of Brewer’s Art, Green Peppercorn Tripel – except it’s much sweeter and better!