Pour is a very attractive, orange/golden clear pour with decent carbonation. The head is good, and the lace attractive. A very attractive beer all around, actually. The lace is incredibly sticky and is some of the best I have seen in some time. 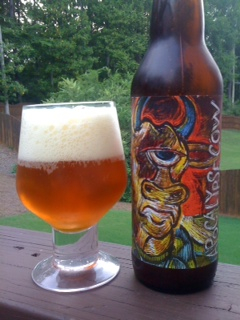 The nose is a good, sinus clearing type in line with the style, but it does have some really nice sweetness as well.

The tastes reflect the nose. The beer certainly packs the punch and flavor depth of a typical West Coast DIPA, but also offers a lot more subtlety and sweetness than some of its cousins from CA, WA and the like. Good levels of sweetness (but never syrupy or cloying), we get some significant citrus notes immediately afterwards and in the back end. This is a VERY surprisingly beer in as much as the beer does not leave very much aftertaste. A very clean beer in a way that many of this style simply are not. Plenty of light citrus, but it rests on the mandarin orange end of that spectrum rather than the aggressive grapefruit side of things.

A very light burn in the chest accompanies the beer, but not in a way that many in the same vein can really attack! Just a pleasing finish all around. No real residue of taste in the back end – oddly clean for the style.

A very tasty beer that has all of the attributes of a typically big DIPA, but at the same time retains a light touch. An unlikely combo I know, but that’s what it does for me.