12 oz single from Mac’s, Atlanta, GA as part of their mixed sixer. The second time I’ve had this, the other occasion being on draught at The Wild Wing Cafe on Hilton Head Island, SC.

There was definitely a danger of me not giving this beer a fair crack of the whip. I am somewhat cynical about this type of beer which I generally regard as a marketing ploy aimed at luring in BMC drinkers with the promise of a ‘light/lite’ tasting, summer offering – (often I’m right, but this seems different). In that respect the name rubs me the wrong way immediately. However, I managed to clear those thoughts from my mind before I sat down with this, and was glad that I did, since the beer deserves a better rap than I was initially prepared to give it.

Nice pour with golden clarity, good carbonation, a healthy head and some half decent lace and retention. Nose gives a gentle whiff of hop character but it is slight. Smells clean and fresh. Good signs. Some light fruit in the nose. 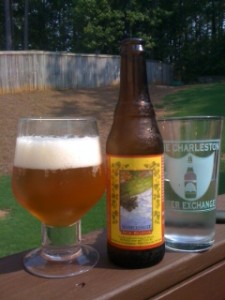 Definite combinations of ‘citrus Centennial’ and a ripe, fruit presence. The beer is drier than I was expecting and delivers a little hop bitterness across the back end. Now, let’s not get confused here, this is simply a ‘kiss’ of hop character, but it IS detectable and the does manage to separate itself from the crowd by virtue of it. There is a distinct fruit element too. The label suggests an apricot specific, but to me it seems a little more generic. The dryish finish and aftertaste manage to enhance the light hop touch to make this a more satisfying beer than I would have initially guessed.

The mouthfeel is sharp and delivers a crisp edge. This beer certainly has some nice, simple elements, but at the same time marks itself as a more serious brew than true beer folk might otherwise expect. Definitely a player in the summer stakes, and a package that delivered a little more than I was expecting.