Every time I see an American brewed beer with the ESB moniker, my heart sinks. On nearly every occasion that I recall, the resultant beer has been dreadfully disappointing, mainly because it has been so far away from the genuine article it often hurt my very soul to see/taste it. The usual issue is a hop profile that is way too high, and the added threat of a west coast brewery in this case doesn’t exactly make me optimistic! We’ll see.

Somewhat confusingly this is called, ‘Extra Special Bitter Ale’ – the ‘Ale’ seems redundant to me. 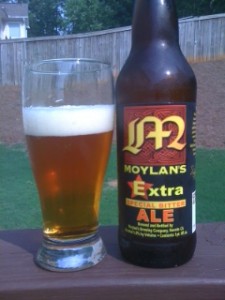 Lovely, golden amber color with great clarity. Nose and tastes have plenty of the requisite biscuit malts that we look for in such a beer. There’s a LOT of roundness to this beer, with a fair degree of subtlety and gentle nuance; typically British, Atypically Moylan’s. It seems somewhat unlikely that a brewery that produces arguably one of the most aggressive beers on the planet (Hopsickle), can even BEGIN to produce something like this. They’ve either had a lot of help, or are more talented than Hopsickle would suggest. A quick look at the label tells me all I need to know. Apparently the beer was made with malts that were grown, germinated and roasted in England by Muntons Malt; ’nuff said.

A gentle carbonation comes with the mellow tones and there is no hint of bitterness here at all. To me, this is less of an ESB (I just don’t think it is sweet enough or perhaps even has a high enough ABV), and more of a cross between a regular, traditional English Bitter, and the softer feel of a contemporary, Golden Ale. There is plenty of warmth in the beer, and that full experience increases with temperature.

A temperate ale that deserves your full attention. It’s tasty.