12 oz can as a single from Mac’s. New style can with different colors from the first time I had this (used to be green, orange and white, now baby blue is the dominant color).

Hazy but VERY bright orange color. Poor head and retention, and the beer seems under-carbonated for something of this style to me. No lace. The nose offers what I would call a generic fruitiness that isn’t really distinguishable as watermelon. 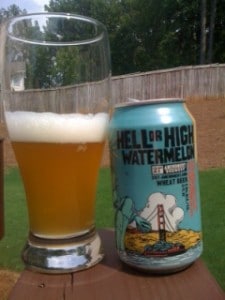 Tastes do offer that typical, artificial watermelon ‘flavor’ that one associates with things like Jolly Rancher hard candy. Predictable, but not necessarily a great thing. The beer is brewed with ‘watermelon concentrate’ (whatever THAT is), and it definitely delivers some of that (synthetic) flavor, but it certainly feels manufactured and artificial. Once in the mouth, the beer feels like it has an even lower level of carbonation than the pour initially suggested – and that’s saying something.

The beers’ aroma and finish combine to get an odd, salt water quality that is reminiscent of mild fish! Not as disgusting as it sounds, but still a little odd.

A fairly big miss for me, definitely the weakest of the 21st. Amendment brews that we get in GA, and although the brewery has certainly attracted some success in connection with this beer, I think it’s only via a novelty factor that has been boosted by the non-beer folk. Many people will get all worked up about it being in a can with a relatively low ABV and it being a fruit based, summer brew, but serious beer folk will see through all that crap and judge the beer on its own merits, which frankly are few and far between. I wanted to like this more, but just couldn’t.