If the truth be known I’m really not a big fan of the bitter, grating unrelenting tastes that rye tends to impart to beer, nor have I been a huge fan of many of the Avery anniversary beers in general, so I approach the beer with a large degree trepidation. Having said that, if there is anywhere the rye bitterness may marry well with a style it would/could be with a contemporary, American Saison, but I’m not sure that a beer of this style needs (or indeed should be), dry-hopped. Having said all of THAT, I much prefer some of the subtle tastes associated with Saisons, so the label is a complicated paradox for me. Also, the best Avery anniversary for me so far has been ‘Twelve’, which was a Saison too, even if a much more (contemporary) traditional one. Silver foil on the neck; better get it open! 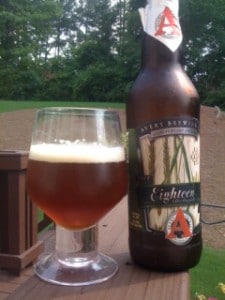 Surprisingly dark, amber pour for a beer that is describing itself as a ‘Saison’, and the head is also somewhat atypical of the style – small, not fluffy and recedes quickly to leave very little lace. Not much retention. nice clarity; medium carbonation.

On the nose and taste front, this is a VERY malty beer which again fails to deliver any real, significant Saison character for me. It reminds me a little of a cross between a Märzen and an Altbier, and even the advertised dry-hopping seems missing from the palate. In fact, the beer seems remarkably unmarried to the label in most respects. I find this a VERY annoying trait, even though I think this beer actually TASTES pretty good.

There is a touch of spice if one REALLY looks/tastes hard, and perhaps a touch of dry character in the finish, but on a blind taste taste if anyone derived ‘Saison’ or ‘dry-hopped’ from this beer I would be astonished. To some extent I am delighted that the rye is also missing (except for a tiny touch of spice in the finish), but at the same time the annoying ‘mis-description’ still grates with me.

In short it’s malty and not what it says on the label, but still a relatively tasty beer.