If the truth be known, over the years I have found the Mutiny Series a pretty average collection of beers, and I’ve said as much in my reviews. Underwhelming taste profiles have led to some pretty disappointing efforts in my book, so for some time my expectations have been dulled. Given that background, I found it rather odd that when I read this was a Dubbel, I felt it might be a style that the series could pull off. I’m really not sure WHY I thought that, but I did – more mind games! 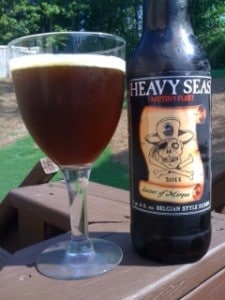 Many Dubbel pours can be VERY drab. I find the usual, murky brown, dirty dishwater color and turbidity somewhat off-putting, so it was nice to see a much, much greater degree of clarity and brightness flow from the 22 oz bottle on this occasion. I suppose that one could be critical of the appearance since it doesn’t really model the typical Dubbel look, but for me this is an improvement, even if it is a little non-traditional. The head is pretty good, with a third of a finger of beige soapiness, and some spotty creamy left behind. Not well retained and somewhat poor lace, so they are strikes against. The color of the beer is a reddish orange bronze with, as mentioned above, a higher degree of clarity than is usually associated with the style. Don’t get me wrong, this is NOT a crystal clear beer, but in the grand scheme of Dubbel’s it might as well be.

The nose offers plenty of sweetness with a good dash of alcohol and some medicinal (almost Tripel-like) esters.

The tastes start to implement some of the aroma pretty quickly. This is a sweeter, less yeasty Dubbel than many and I again some will not approve. On sheer style markers this is perhaps not the best Dubbel, but it is a tasty Dubbel/Tripel hybrid. A little marzipan, with a drier alcohol finish than I was expecting. In fact, quite harsh in the back end as it pulls hydration from the tongue with a whole bunch of orange notes. Bitter marmalade cuts across the rear of this beer.

A surprising end to this beer. It feels lighter and more sharp than a Dubbel normally does, with the sometimes sugary dull ending being replaced by some sharper bitterness.

I was right! One of the better beers in the (generally) disappointing Mutiny Fleet Series, but at the same time a Dubbel that sits near the edge of the style. Still, I think it works well.

Other: 8% ABV from Green’s on Buford. Mutiny Fleet Series.