God bless ’em, Red Brick (aka Atlanta Brewing Co.) just CANNOT get their packaging right! Despite a whole bunch of recent attempts to re-brand, it still doesn’t seem right to me. Anyway, I guess that’s another rant so back to the beer. 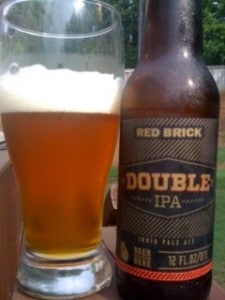 12 oz single. Pretty, gold color that comes with a one finger head. Decent retention, and some nice lace.

The nose offers some of that onion element that we saw reported so much with Oskar Blues Gubna a couple of years ago. A little pepper in there too, and this is not really a beer that exudes a lot of hop character in the aroma. On warming some solvent alcohol comes through along with more tempered onion notes but still not much hoppy character – odd.

Tastes reflect the nose significantly. A sharp bitterness that is not tempered with much malt. Certainly what one would called a non-west coast DIPA, since it lacks significant hop resins and is largely devoid of oily pine. It still gives a stinging, dry metallic note, but this is not a beer that takes much inspiration from the sweeter end of the spectrum. The alcohol comes pushing through as well, and not in a good way!

I don’t care for it much, and my suspicion is that real DIPA lovers will not be very enthused. It’s not a bad beer by any stretch of the imagination, but at the same time it fails to deliver far too many of the typical attributes of the style – even o when considering the east coast origin.

For me, Red Brick just can’t nail it.