Shock, horror! This is a big, bold, hop-bomb without any excuses or any pretense. In many ways that is a plus, since the beer ‘does what it says on the can’ and that is an admirable trait and one which is too often neglected these days. 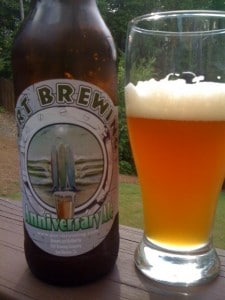 Pour is a very attractive, bright, orange body with plenty of highly pitted, white head. The retention and lace are not tremendous, but given the ABV it’s entirely excusable.

Nose and tastes come together in an utterly predictable (but authentic) manner. Alcohol and big, bold hop notes crash the party with abandon. The burn manifests itself quickly, but also mellows quite readily as well. Bitterness in the final throws and a biting pepper-like aftertaste. It’s all there, including the telltale hoppy burps that are induced with the beer. Burn in the chest also comes on strong (in true West Coast, DIPA fashion). Not much fruit here, but the beer seems relatively balanced (at least in terms of the style and what one can hope for). Lots of oily, hop resin elements but surprisingly not too astringent.

Strong brew that fits the profile of this type of beer nicely.

There it is, not much to report here other than what you would expect from a West Coast hop monster, but if you know what you are looking for, this is probably it.