My first of the Beer Camp Series. Picked this up at Mac’s in Atlanta, along with two of the three others from the Beer Camp mixed pack. Put into their mixed sixer. Clear, golden color with a nice degree of carbonation. Small, one-finger, white head. Quite surprised at the depth of golden color. 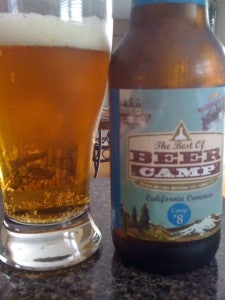 Bready notes in the aroma. The bread element is pulled into the initial tastes but this quickly changes. Significant bitterness in the middle to back end with a distinct note of Pilsner, Saaz bitterness – surprising. Definite level of alcohol with a syrupy, burn. Quite nice. Reminds me a bit of an Imperial Pils but is not as dry as a ‘normal’ strength Pilsner – the beer ends with a lot more of the bready alcohol.

There’s a certain white wine or grape note here as well. As such, there’s a touch of fruit there.

Strange beer in as much as the alcohol is really quite prominent and there’s a lot of sweetness with some residual sugars and some viscous elements,  but I like it!

Not sure where this fits into the grand scheme of things in terms of the style, in fact in a blind taste taste I doubt I would put this in that category at all and it feels like a much heavier beer.

Other: 6.50% ABV, brewed by Dave Blanchard of The Brick Store in Decatur (VERY NEAR Atlanta!), GA.