Another 22 oz, one-off (presumably) offering from the Sweetwater Brewing Co., that for my money have eclipsed Terrapin in their ability to produce a consistent, high quality special release beers.

The usual Sweetwater presentation with screen printed bottle; at least this time there isn’t a bunch of juvenile, sophomoric innuendo associated with the beer – a nice change! 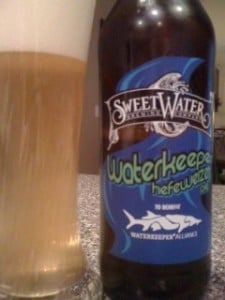 Deliberately poured this one aggressively into the Tucher Weizen 0.5 L glass (as I do with most, if not all Hefeweizens) in the hope of some excellent head and lace following. Head has the requisite, ‘ice-cream blob’ in its appearance, but it is smaller than I would otherwise like it to be and it doesn’t produce much lace; only 6 or 7 out of 10, there. Honey lemon color is quite acceptable, with decent haze from the sediment on the full pour.

The nose offers plenty of those medicinal clove and conflicting, confusing ester notes and phenols, but it works nicely. I would describe the nose a strong point for this beer. The tastes DO have those classic elements too, but they seem much more reserved than the nose would otherwise suggest, and to be honest I feel a touch let down – I wanted (and from the aroma, expected) a little more. Plenty of bread based malts and a splash of lemon here and there.

Finish ends with a touch of alcohol and some decent white pepper. A vigorous ending which I like a lot. Even a slight warmth in the aftertaste.

Enjoyable, and at $3.99 for the bomber, in the context of 2011 prices pretty good value. Indeed, although not a stunning offering from Sweetwater, it IS solid, and at the price point represents very good value. Well done.