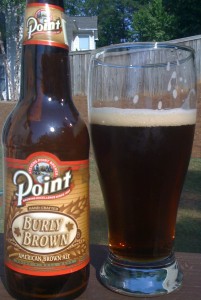 Not a brewery that generally sets the pulse running, but I’m always open to trying the next beer from any brewer, so when this one literally fell out of the DBF on to the floor and started leaking, I took as a sign to drink it! Thanks go out to Kevin for the opportunity to try it.

Pour is an impressive red mahogany color, but the head, lace and retention let it down a bit. The depth of color deserves more than the head delivers so there was a little disappointment there.

Tastes relfect that general ‘nuttiness’ that one gets with good Brown Ales, but of course that’s NOT necessarily a ‘nut’ taste, rather it’s the combination of sweet malts and warming alcohol that come together to give the depth of taste that is so important to a beer of this style. Aftertastes repeats the sweetness and the mellow effect of the caramel-like maltiness really shine in the back end.

Carbonation here is surprisingly lively. Not necessarily something that I would be looking for in a beer of this type, but the truth is that it comes together quite nicely. Unfortunately the body is NOT the best, but it just about holds it together.

A pleasing beer partly because it was tastier than I expected, and partly because of the simplicity it delivers whilst being truer to an English version of the style – traits that I admire in general. Overall a solid offering but closer to the English original rather than anything American inspired.